You are here: Home / Quick Electricity / Save Energy During the Holidays with LED Lights

Outdoor Holiday Lighting: How to Impress Your Neighbors While Saving Electricity with LED Lights!

There’s an old saying that everything is bigger in Texas, and this also applies for Christmas decoration and lighting. However, Texans go the extra mile with holiday lighting, especially in Dallas, where outdoor Christmas decoration is so impressive that it has become a tourist attraction. Many neighborhoods essentially become Christmas theme parks, in some cases including rides and guided tours. As you can expect, this creates a type of friendly competition among neighbors, since everyone wants to have the brightest and most impressive Christmas decoration around.

The basic principle to create an impressive winter landscape is simple: more Christmas lights and decoration require more cash. However, not all holiday lighting is made equal, and LED products offer the best performance features while being the least power-hungry and the safest to handle.

Lighting is probably the most important element of Christmas decoration, and the same energy efficiency tips that apply for normal residential and commercial lighting hold true here: LED lighting delivers savings above 80% compared with conventional incandescent lighting, and even greater savings can be achieved when LED is combined with smart controls. Sure, it’s the Christmas season and savings tend to take a back seat, but LED lighting also offers functional benefits when used in holiday decoration. 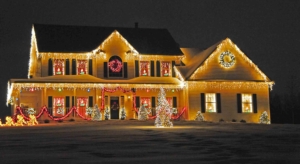 Why LEDs Are Ideal for Christmas Lighting

LEDs bring many practical advantages when used in holiday lighting. Assuming you have two light sets with the same number of individual lamps, but where one is LED and the other is incandescent, the LED light set will draw a much lower current. Have your incandescent light sets ever burned out because too many of them were connected in a row? Thanks to the reduced current draw of LED technology, you can connect more consecutive light sets without overheating issues.

LEDs also solve another tough choice when dealing with Christmas lighting: Do you want white lights or colored lights? With incandescent light sets, you are stuck with your choice for the entire Christmas season, unless you are willing to spend in two overlapping installations. On the other hand, there are LED light sets that can be configured to produce any color in the visible spectrum. You can even program automatic light patterns into them to impress passerbys.

Individual LEDs are very small, so it is possible to manufacture lighting products in almost any shape. In the case of Christmas decoration, LED has resulted in a broad range of products with built-in lights, which were not possible with incandescent bulbs. Even when fluorescent lighting reached the commercial market, Christmas lighting had continued to rely on incandescent bulbs. Fluorescent lights are not well suited to produce blinking patterns, and they are very vulnerable to cold temperatures, not to mention that their color rendition capacity is poor.

LED lighting is also characterized by an extremely long service life: most bulbs are rated for more than 20,000 hours of use, while incandescent bulbs typically last for less than 1,000 hours. Replacing burnt bulbs in holiday light sets can be a tedious task, but LED lights rarely need a replacement, especially when you only use them for a short time of the year.

Since Christmas lighting uses patterns, and individual bulb may be switched thousands of times in the holiday season. Among all lighting technologies, LED is the least affected by constant switching, adding to the reasons why they are the top choice for holiday lighting.

The idea of using the same Christmas lights for many winters in a row may seem boring, but consider the versatility of LED lighting. If you want to change the “theme color” of your decoration each year, it’s just a matter of adjusting your light sets accordingly. Premium lighting products even come with smartphone integration and remote control features.

If you use incandescent lighting, a 100-light set typically costs less than $10, while an LED light set of the same length may cost $20 or more. LED seems more expensive at a glance, but it is actually cheaper once the total ownership cost is considered. To break down the financials, let’s compare both types of lighting in a table:

Assuming you use 10,000 lights in total (100 sets), the LED option will result in 0.7 kW of lighting power, while the incandescent option consumes 4 kW. Although 100 light sets may seem like a lot, consider that we’re talking about the DFW metroplex, which has some of the most impressive Christmas decorations in the country.

If the home in the example above uses decorative lighting for 900 hours during the holiday season, and the electricity price is 10 cents/kWh, the total operating cost for one Christmas would be the following:

You would be paying almost six times more for electricity with the incandescent option. Also consider that they only last for one Christmas. 100 sets have a cost of around $1000, and added to the $360 in electricity bills you get a total of $1,360 per Christmas.

With LED lighting, the purchase cost for 100 light sets is around $2,000, twice as much. With 20,000 hours of service life they can technically last for two decades, but let’s assume five years because by then there will be newer products in the market. The $2,000 are spread across five holiday seasons, which results in $400 for each. Add this to the electricity expenses and you get $463 per Christmas. In other words, LED lighting not only offers superior performance, you also spend much less on Christmas lights in the long run.

Even if you are willing to spend a lot on Christmas lighting, LED products give you more bang for your buck. If you plan to go overboard when decorating your home for the holiday season, you might as well do it with the best commercial lighting technology available! With their smart controls and color flexibility, LED Christmas light can impress more than equivalent incandescent lights.

Considering that you can string more sets together, LED lighting also simplifies installation and gives you more flexibility to decorate your place. For example, you can get more creative when you can string 25 LED light sets in a row, as opposed to 5 incandescent light sets. Just keep in mind that LED lights can also overheat, it’s just that they take more connected sets to reach that point, so check the maximum number allowed by the manufacturer.

There are also smart Christmas light sets that feature color adjustment, programmable patterns and other similar functions. They are more expensive as you might expect – a 100-light LED set with smart features can cost anywhere from $30 to $60, depending on the brand and the features included. LEDs are electronic devices, more closely related with smartphones and gadgets than with other types of lighting. Thus, they bring the benefits of these new technologies: fast response and personalized settings. Conventional incandescent lights are normally limited to a few blinking patterns, while high-end LED products can respond dynamically to ambient music and can even interact with people.

Although the risk is reduced if your property has adequate electrical protections, there have been cases where faults associated with Christmas lighting start a fire. Christmas lights are often installed close to flammable objects, and the risk is increased if light sets have loose connections or damaged insulation. LED lighting operates at a lower temperature than incandescent lighting, which minimizes the risk of burns from accidentally touching a light that has been on for long hours.The reduced operating currents of LED lighting also contribute to fire prevention.

LED products are also safer to handle even when disconnected: while most incandescent bulbs use glass, equivalent LED products use shatter-free acrylics or similar materials. If you have children, you have even more reasons to use LED holiday lights – the kids will likely be eager to help decorate your home, and LED lighting products are much more user-friendly, but don’t let them handle Christmas lights connected to the power supply!

Thank you for visiting Quick Electricity. We offer competitively low electric rates from the best energy providers in Texas. Before you leave, take a look around.

With Quick Electricity, it’s never been easier to get same day electricity. We offer the LOWEST rates from the BEST energy brands in Texas. Whether it’a 24 month locked in rate or pay-as-you-go electricity, we have flexible payment options to suit your needs.
Read More...
Acacia Energy Rolls Out 2019 Electricity Plans; Vows to Help Texans Repair Poor...