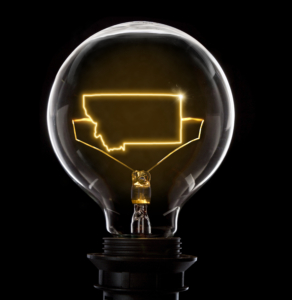 Natural gas has been deregulated since 1986 in Montana. The state also deregulated electricity in 1997, but the transition was not managed properly: the Montana Power Company went bankrupt while electricity prices soared. In response, the state decided to regulate its electric power sector once more.

Montana has the largest underground natural gas storage site in the US, with a capacity of 287 billion cubic feet. However, the state only accounts for 0.1% of national gas reserves and production, and it relies on imports to cover 50% of its demand, mostly from Canada. Around 50% of households rely on gas heating in Montana, and they represent 26% of consumption.

Only 2% of Montana’s electricity is generated from natural gas. Coal and hydroelectricity are the two main power sources in the state, representing 43% and 40% of generation, respectively. Wind power is in third place with a 12% share of electricity production.

Learn more about US states with deregulated energy.