The History of Texas Electricity Deregulation

The electric power industry has existed since the late 1800s, but it remained almost unchanged for a century. Electric companies held monopolies for decades, controlling all areas of the electric supply chain: generation, high-voltage transmission, medium-voltage distribution, metering for homes and businesses, and billing. However, the US power sector has experienced rapid changes in the 21st century:

Texas has the largest deregulated electric sector in the US. Over 26 million Texans can now choose their electricity provider, which represents over 90% of the state’s population. The electric market is managed by ERCOT – the Electric Reliability Council of Texas.

How Electricity Deregulation Came to Be in Texas

When the electric industry was new, there was little control over the first power companies. The Public Utility Holding Company Act was created in 1935 for this reason, regulating utility companies and assigning them to specific regions. Electricity monopolies continued to exist for several decades, but now are subject to government regulation. This changed with the Energy Policy Act of 1992, which gave states the authority to create competitive energy markets.

The story of electricity deregulation in Texas dates back to World War II. Utility companies in the state formed the Texas Interconnected System (TIS), which had the main purpose of powering military manufacturing centers in the Gulf Coast. However, power companies soon realized the benefits of being interconnected, and the TIS became ERCOT in 1970, under the oversight of the Federal Energy Regulatory Commission (FERC).

Electric deregulation brings many benefits, but having options can also lead to confusion, especially when dealing with a technical topic like energy. Just like you can save on power bills by choosing an adequate plan, you can end up paying much more with a poor selection.

How Much Does Electricity Cost in Texas?

According to the Residential Energy Consumption Survey from the US EIA, the average Texas home uses 13,895 kWh per year. With the average electricity price of 11.87 cents/kWh, this results in an average bill of $1,649 per year. However, there are two important factors to consider:

There are several types of electricity plans in Texas, but most can be classified into five broad categories:

Which States Have Deregulated their Energy Sector? 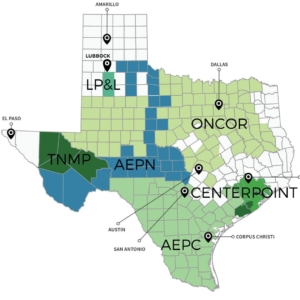 Electricity Choice in Texas – The Power is Yours

Don’t rush into an electricity plan; you have choices, and in many cases, you have lots of them. The good news is, Quick Electricity sells home energy in fixed electricity plans or in a pay as you go format.  To make a long story short, you only pay for the electricity you need, and nothing more.