Coronavirus and Saving Energy With More Time at Home

You are here: Home1 / Energy Saving Tips2 / Coronavirus and Saving Energy With More Time at Home

Two years after the pandemic, children and adults alike are spending more time at home, and higher electricity bills can be expected. However, there are many effective ways to save energy while working and schooling from home.

Contrary to popular belief, electronic devices used for entertainment only represent a small fraction of your power bill. This article will give you some effective recommendations to avoid a sharp increase in your electric bill.

In this article, we discuss;

1) Make a list of the lighting fixtures you use the most, and upgrade them to LED.

If you ask an energy consultant for recommendations to save power, LED lighting will most likely be in the list. LEDs consume over 80% less power compared with incandescent and halogen lamps, and between 30% and 50% less power than fluorescent lamps.

LEDs also last much longer than the lamps they replace, which means you will also save plenty of bulb replacements over time.

However, upgrading all lamps in a household to LED may not be the best strategy. To save energy with LEDs, you must upgrade lighting fixtures that are actually used. For example, you will not save much with LED lighting in a guest room that is rarely used, or in a storage room that is only accessed a couple times per week.

When upgrading to LED, focus on rooms that are used the most hours each day, such as the kitchen and the living room. If you have a studio that is currently being used for home office, upgrading the lighting there is also recommended.

When purchasing LED lamps, the best recommendation is looking for the ENERGY STAR logo. These lamps have been subject to rigorous tests, according to performance guidelines from the US Environmental Protection Agency. If hardware stores are closed where you live, you can often get LED bulbs in supermarkets or buy them now on Amazon. 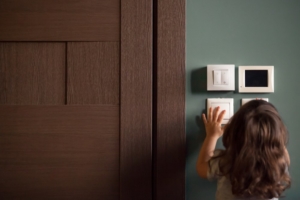 2) Turn off any lights that are not needed, and use daylight when possible.

LED lighting has a low operating cost, but sunlight is free! For this reason, you should take advantage of daylight whenever possible. Make a habit of looking for unnecessary lights and turning them off. This becomes easier when all your family is at home, since there are more eyes available to spot any lights that were left on.

If you are working from home, find an area that gets plenty of natural lighting during the day. Just make sure you find a spot where the sun is not visible directly – glare is distracting and potentially harmful for your eyes.

If you use a space with natural lighting and no glare, you will greatly reduce lighting costs when working from home. Try it today!

3) Use caulking, weatherstripping and well-placed curtains.

Most of the energy consumed at home is used for air conditioning and space heating, depending on the season. Air leaks make energy expenses higher, since they cause winter heat loss and summer heat gain. However, many leaks can be fixed easily with caulking and weatherstripping.

Curtains can also improve energy efficiency slightly. While the sun provides natural lighting, it can also cause unwanted heating during summer. By closing the curtains in areas where you don’t need light, you can reduce solar heating and save on air conditioning.

The opposite applies during winter days, where you can take advantage of sunlight to help heat your home.

4) Rearrange furniture and decor into a smarter layout.

Air ducts can be blocked accidentally by furniture or other decor, and in some cases this is on purpose to hide the ducts. However, blocked air ducts waste energy, since your heating and air conditioning systems must work harder to keep a suitable temperature.

When your air ducts are not obstructed, your HVAC system consumes less energy to keep a comfortable indoor temperature. To improve comfort, you can also move your chairs, couches and beds closer to duct openings.

Also make sure your HVAC filters are clean. Clogged filters waste a lot of fan power, and they reduce the effectiveness of heating and cooling equipment.

According to the US Department of Energy, water heating accounts for 18% of energy consumption in a typical US home. When staying more time indoors, make sure you are not using more hot water than necessary.

Also make sure your water heating is configured properly. If you have a hot water tank, a common mistake is leaving the heater on all the time. A smarter solution is programming the heater to run at the times when you need hot water.

Tankless water heaters consume less energy, since they only activate when water is actually flowing.

6) Use your washing machine, clothes dryer and dishwasher more efficiently.

With both washing machines and dishwashers, you can save energy by using full loads instead of several smaller loads. If you don’t need to dry your clothes urgently, hang dry them instead of using the tumble dryer.

Consider using a cheap portable washing machine. Electric dryers can be very expensive to use – some models use more electricity than three room air conditioners at once!

7) When working from home, use a laptop and take advantage of daylight.

When working from home you have more control over your schedule, but this can affect electricity consumption. Working during the day with natural lighting is more efficient, since you must use lighting fixtures to work at night.

Also, a laptop is more energy efficient than a desktop computer, since laptops consume around 80% less power. Most laptops now include an energy efficient mode, and you can enable it for additional savings.

Note that complex software that requires plenty of computing power may be affected by the energy saving mode – disable the mode when this happens.

8) Use a power strip for your electronics, and power-saving mode when available.

You may have read articles that recommend disconnecting all your electronic devices every day. Plugged devices that are turned off are often described as phantom load or “energy vampires”.

There is some truth, since many devices consume a small amount of power on standby. However, this measure will probably save only a few cents, and you could damage plugs and sockets by connecting and disconnecting everything daily.

As an example, assume you have 15 devices that consume 3 watts each when plugged and not in use. If you disconnect them for 10 hours each day, you are saving around 164 kWh per year.

Assuming an electric rate of 12 cents/kWh, this measure only saves around $1.65 per month. This is a small reward for the task of connecting and disconnecting all your devices every day.

If you want to unplug your devices daily, an effective solution is connecting them all to a power strip. Instead of plugging and unplugging several devices each day, you can simply switch off the power strip. 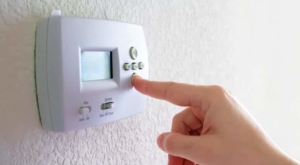 Devices that accomplish heating or cooling functions have the highest energy costs in households. However, you can save energy by setting back all temperatures:

A smart thermostat is a great option, since it learns your habits to optimize temperature settings. Just make sure you use a thermostat that is compatible with your HVAC systems.

The same principle applies for hot water systems, where you can also save energy by using a lower temperature setting.

The purpose of setting back temperatures is not to make you uncomfortable, but rather to avoid unnecessary heating and cooling expenses. Do not set back temperatures to a point where they cause discomfort, especially when you will be spending plenty of time indoors.

Also make sure you open the refrigerator door as little as possible, and decide what you need before opening the door. Avoid frequent openings, or standing in front of the open door choosing what to eat.

10) Learn how your electricity rate plan works, and look for better options.

Not all electric rates are alike. For example, some have variable prices throughout the day, while others offer low and fixed prices if you sign for a specified number of months.

Learn how your rate works, and use that in your favor. If you are charged variable prices throughout the day, use low-cost hours for any activities that involve electrical appliances.

Also make the habit of comparing electricity plans regularly, since you may find a better deal than your current one. Quick Electricity offers a variety of energy plans in Texas.

If you have solar panels, you can also take advantage of the peak in electricity generation around noon.

With Quick Electricity, it’s never been easier to get same day electricity. We offer the LOWEST rates from the BEST energy brands in Texas. Whether it’s a 24 month locked in rate or pay-as-you-go electricity, we have flexible payment plan to suit your needs.
Read More...
How to Save Energy in the Laundry Room