Electric utilities operated as state-regulated monopolies during most of the 20th century, controlling the entire electricity supply chain: generation, transmission and distribution. However, oil sector volatility raised electricity prices after the 1970s, and deregulation was introduced to create a more competitive and efficient energy sector.

The Energy Policy Act of 1992 allowed states to create competitive energy markets for private generators, and where energy retailers could purchase at wholesale rates to sell electricity directly to the end customer.

Since deregulation seeks to increase the efficiency of the energy sector, transmission and distribution remain under the control of a regulated utility company; the alternative, which is allowing generators to build separate power grids, would be neither practical nor cost-effective. Energy consumers in deregulated states purchase electricity from their retailer of choice, and pay a transmission and distribution fee to the utility company.

There are currently 16 states with deregulated energy, the most recent to deregulate being Michigan in 2008. Washington DC has also deregulated their electric sector, though the state of Virginia is still regulated.

The following table shows the 50 states and their regulation status (2017), along with their average residential electricity rates. 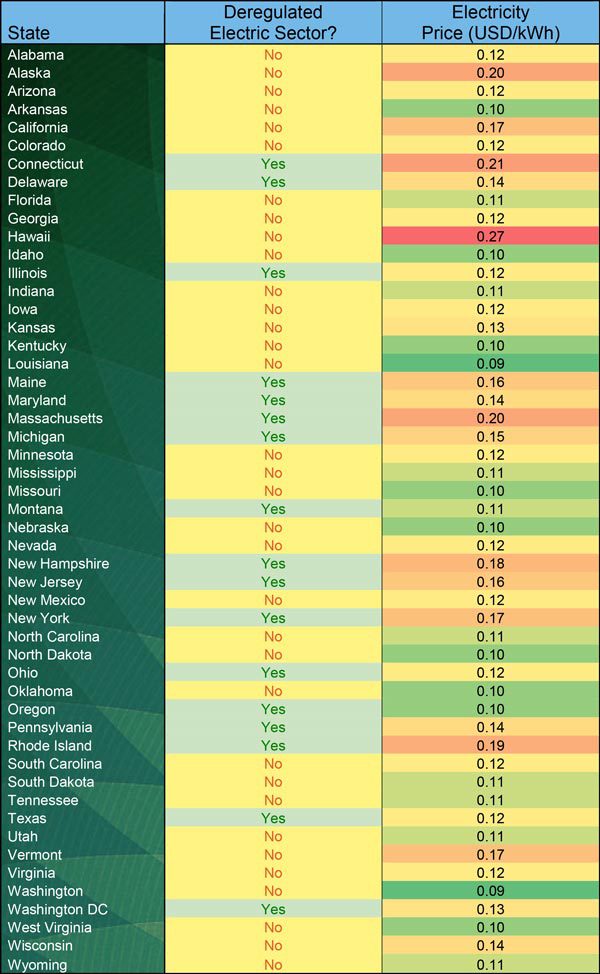 *California deregulated their electricity sector from 2000-2001 but placed a cap on the retail electricity price. This resultsed in utiltiy company bankruptcies and rolling blackouts and California has returned to a regulated market.

The average price of electricity across deregulated states is $0.15/kWh, compared with $0.12/kWh for regulated states. This has created a misconception that deregulation increases electricity rates, but Cornwell University reached a different conclusion after analyzing utility price trends for the past two decades. Some of their findings uncovered more factors affect the average rates.

Electricity price fluctuations over recent years have been caused in great part by the price variation of natural gas, one of the main power sources used to meet peaks in electricity demand.

The transition from a regulated to a deregulated environment involves high costs for utility companies, which tend to delay price decreases.

Some states have a higher abundance of hydropower resources, which provide low-cost electricity. This applies to states that make ample use of coal power plants, which provide affordable electricity, but with the highest emissions among all fossil fuels.

Deregulation has been successful in many US states, most notably among those in the New England region. Most utility companies have responded by creating separate deregulated business units to operate their generation assets and participate in the wholesale market. With respect to energy prices, statewide policy plays a significant role: in general, electricity rates are lower in states that prioritize public welfare over corporate profits. 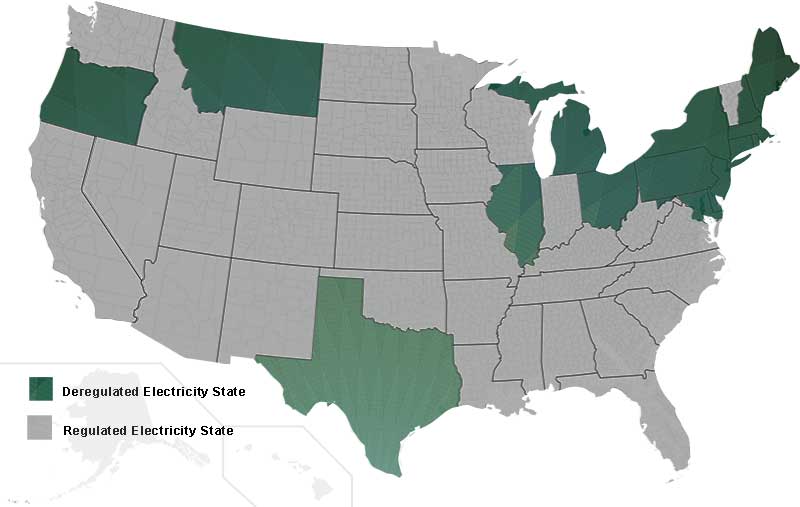 Who Has the Cheapest Electricity in US?

The two states with the lowest average electricity rates (as of April 2017) are Louisiana and Washington, weighing in at .09 USD/kWh. Both of these states are still regulated.

Following close behind at .10 USD/kWh, the following states:

The Texas electricity sector has been deregulated since January 1, 2002, and local electric utilities were forced to split into three types of business units:

Between 2000 and 2010 there were several natural gas price spikes, which limited the potential benefits of deregulation for Texas. Gas prices had been low before 2000, and many generation companies in Texas decided to invest on that energy source in the newly deregulated market. However, natural gas prices have been much more stable after 2010, and Texas energy generators have been able to reduce their rates accordingly: deregulated electricity prices in Texas remained under the national average for six years in a row between 2010 and 2015.

With Quick Electricity, it’s never been easier to get same day electricity. We offer the LOWEST rates from the BEST energy brands in Texas. Whether it’a 24 month locked in rate or pay-as-you-go electricity, we have flexible payment options to suit your needs.
Read More...
How to get FREE ELECTRICITY in Texas